"A delicious spicy salad, made from tender cactus, tomatoes, onions, jalapenos, cilantro, and lemons. This is hot and spicy, so beware!" 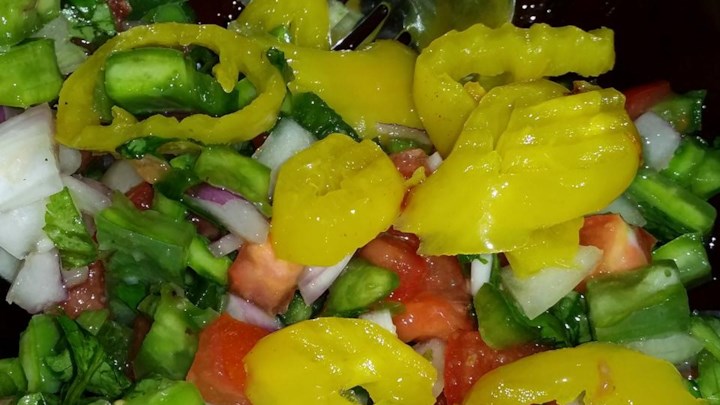 While in Austin, Texas, Daniel Delaney came across many nopal cactus leaves. In this episode of What's This Food?!, he takes a look at the delicacy and use it make a perfect fluffy omelet, Tex-Mex-style! Note, he's got a spiny cactus, ours is very much easier to prepare needing only rubbing down with a cloth. From Wikipedia,
the free encyclopedia

Nopal comes from the Nahuatl word nohpalli for the pads of the plant. Nopal is a common name in Mexican Spanish for Opuntia cacti (commonly referred to in English as prickly pear), as well as for its pads.

The Wiki article talks of how nopal pads can be eaten raw or cooked, used in marmalades, soups stews and salads, as well as being used for traditional medicine or as fodder for animals. Farmed nopales are most often of the species Opuntia ficus-indica or Opuntia joconostle although the pads of almost all Opuntia species are edible. The other part of the nopal cactus that is edible is the fruit called the tuna in Spanish, and the "prickly pear" in English.

Nopales are generally sold fresh in Mexico, cleaned of spines, and sliced to the customer's desire on the spot, they can also be found canned or bottled, and less often dried, especially for export. Cut into slices or diced into cubes, nopales have a light, slightly tart flavor, like green beans, and a crisp, mucilaginous (squishy) texture. In most recipes, the mucilaginous liquid they contain is sometimes included in the cooking. They are at their most tender and juicy in the spring.

Nopales are most commonly used in Mexican cuisine in dishes such as huevos con nopales (eggs with nopal), carne con nopales (meat with nopal), tacos de nopales, in salads with tomato, onion, and queso panela (panela cheese), or simply on their own as a side vegetable. Nopales have also grown to be an important ingredient in New Mexican cuisine[3] and in Tejano culture (Texas).

Be brave when you collect cactus.

Of course, good gloves and tongs help. With those tools you can have a very steady and nutritious supply of a tasty wild edible, and not only in warm areas. Cactus grow from Alaska to Argentina, or chilly Canada to chilly Chili, and other parts of the world. People have been eating Nopalea/Opuntia for at least 9,000. It’s not too late to join them.
Read more about 'Cactus Cuisine'!